Wes, book 17 in the Whitedell Pride Series, will be out tomorrow. You can find it here http://www.extasybooks.com/wes/ 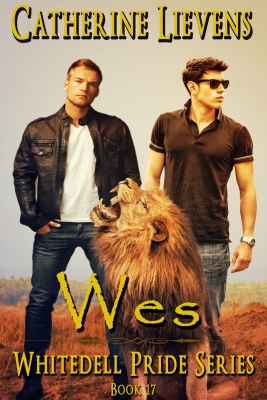 Sometimes the secrets we keep aren’t as unacceptable as we thought they were.

Wes has been on his own since he was sixteen, and he’s had to do what he needed to do to survive, even if it meant being a prostitute. He’s never known love, but that starts to change when he meets Taylor. Wes feels wanted as a person for the first time, but he knows Taylor could never accept him, so he flees.

Taylor hadn’t expected to wake up alone on the day after he claimed his mate. He doesn’t even know Wes’ full name or phone number, so he has no way to find him. Just when he thinks he’s lost Wes forever, Wes is attacked and calls a pride member for help. Taylor knows he has to tell Wes about his furry half, but after Wes ran once already, Taylor is scared of his mate’s reaction.

Wes accepts staying with the pride, but can Taylor really accept him and his past? And can Wes get used to living with people—with shifters—when he’s been alone for three years?

And in the meantime, here’s an excerpt featuring our two favorite trouble makers 🙂

Wes wasn’t hurting as much as he had when he’d fallen asleep. He liked that, and he wondered if he could get away with sleeping some more, but someone poked his cheek. Realizing that was what had woken him in the first place, he opened his eyes.

He’d thought it might be a kid, because who else would poke you awake, right? But nope, no kids, unless you counted the two guys standing by his bed as overgrown ones. One certainly looked like it, with his pink hair, electric blue sweater, and orange jeans.

The other had Wes blink, then cringe. He reached for the sheet, hoping that hiding under it would make Keenan and his friend go away. Someone poked his foot instead, then pulled on the sheet.

“Doesn’t look like a guy who goes dancing to me.”

“Why, guys who like to dance have a particular face or something? Like, you can tell what someone likes just by looking at them? Is that a Nix thing?”

“Might be because he was beaten, what do you think?”

Another poke. “No need to be sarcastic, Kee. I was just pointing out that you said this guy tried to pick up Joshua, but he doesn’t look like much to me.”

Wes huffed and pushed the sheet away, because Keenan and his friend clearly weren’t going away. “What do you want?”

The other guy poked Wes’ cheek and Wes batted his hand away. At least doing it didn’t hurt—much. “Go away,” he groused. He didn’t want to look at Keenan.

Keenan hopped on the bed instead, and settled next to Wes’ hip. Wes groaned and contemplated smothering the man with his pillow, but he didn’t think he was up to that just yet.

Nysys sat on Wes’ other side and Wes felt suddenly overwhelmed and like he should run away before things went bad. “Pleasure to meet you, bye.”

Wes closed his eyes and settled back against his pillow, but a finger poked his cheek again. He sighed and opened his eyes to see Nysys prodding at him. “What?”

“What happened to you?”

“I was beaten by some guys.”

Wes shrugged, pleased when his ribs hurt only a bit. “They didn’t like my haircut?”

“Or the fact you were close to a gay club,” Keenan pointed out.

“Or that,” Wes conceded.

“Joshua said you hurt one of the guys.” Nysys looked far too cheerful for this type of conversation.

“Yeah, well, I wasn’t going down without fighting.”

“Where did you learn to fight? Why did you have a knife? Do you always have one, like one of the bad guys in the movies? Or is it only when you go dancing? Did you have one when you met Joshua? Why did you hit on him?”

“Jeesh, let the man answer,” Keenan told his friend. “He can’t if you don’t shut your flap for at least a few seconds.”

Nysys snapped his mouth shut so fast and hard that Wes heard his teeth clang together. Nysys winced and touched his lips, but he clearly was more worried about obtaining answers, because once he was sure there was no blood or open wounds, he stared at Wes. Wes stared back without saying anything, and Nysys widened his eyes and tilted his head. He did it again, and again, trying to push Wes to talk to him.

“What the fuck are you doing here anyway?” Wes asked instead. “Where’s Taylor?”

Nysys reached over Wes and smacked Keenan’s forehead. “And I’m the one who should shut up and let him talk?”

“I so was! Asking about knifes is important.”

“Not more than knowing if Taylor’s good in bed. I bet he is, and even if he isn’t, with an ass like that I’d forgive everything else.”